It was a perfect evening in Zwara Café at The Grand Avenues. I was sipping Turkish Coffee with medium sugar, just the way I like it, while discussing the Gulf War with my friends. The Ogaily and Kunafa that we were sharing were extremely tasteful that we had to cut the conversation to compliment them after every bite. I love talking about the Gulf War with Kuwaitis because I get to hear inside stories from people who witnessed the events, lived through it and survived it. And there we were, four Bahraini girls and a Kuwaiti one, having a rich conversation with classic Khaleeji songs playing in the background. My mind withdrew from the conversation when Abdulkarim Abdulqader started singing Meshtereeh. It was a pure Kuwaiti moment with all the traditional surroundings, the accent echoing all around us, the taste of the authentic desserts and the old music. I just wished that the beautiful feeling I felt right then could last forever.

For three full days I felt like I was living on a cloud. I’m a person who gets easily irritated but I was in such a good mood that nothing was able to ruin it. I came to a conclusion that Kuwait is the most inspiring country in the Gulf. It’s easy to spot and feel the passion of the talented youth wherever you go. It was like watching a modern version of “7aflat elKuwait” and admiring every scene just like I used to do when I was a kid. Kuwaitis never fail to impress the world with their talents, uniqueness, originality and most importantly; their genuine love for their country.

It was very exciting to be surrounded by fashionable people. Girls, guys, mothers, kids, men and even grandmothers were dressed up. Each one of them had his own unique style. I admired how familiar they were with fashion and how they had the ability and confidence to play with their look. For example, if the outfit was too simple, the wavy hair and dark makeup would balance the look. It was also very interesting to see people spending the day out of their homes and enjoying their time. All restaurants and cafes were lively and full. The food was excellent and the atmosphere was vibrant everywhere we went. I believe that this was the source of the happy vibes I got.

We made the right decision by staying at Missoni Hotel. Fresh colors, very good service and location (it was not as far as people made it sound), and the view of the city extending over the sea was beautiful. But more was expected from a 5 starts hotel, like providing shower caps and cotton buds in the toilet. But it was a comfortable hotel nonetheless and the breakfast buffet was extremely delicious. 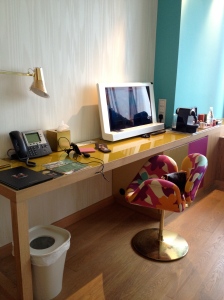 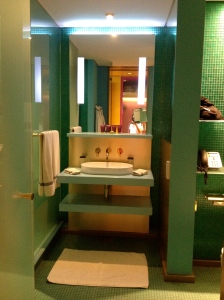 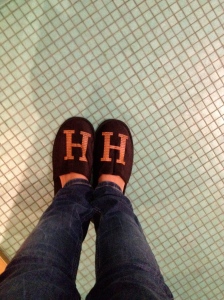 Having late lunch at B+F was a pleasant experience. The food was very good and the restaurant was almost full which was not expected since it was half past three. 360 mall was nearly empty but it was nice to walk around the designer shops and cafes. 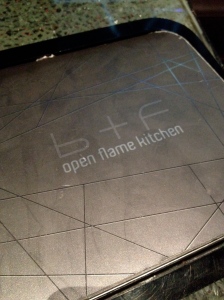 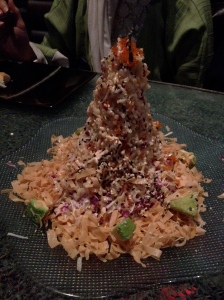 We visited two local boutiques in AlJabria area. The Creative Style and My May. It wasn’t my favorite part of the trip as I’m not a fan of funky outfits but I made sure to buy the only classic item I found! It was raining outside and that was a lovely thing to remember other than digging for something that suited me.

Chocolate Bar was never my kind of café. But I was desperate for caffeine and it was one of the few attractive options at AlHamra Mall. The Turkish Coffee was good but the cookie wasn’t. Discovering this new mall was quite interesting as it was quiet with a variety of shops, mostly designers. Note that “quiet” in Kuwait means almost full but not crowded, while “quiet” in Bahrain means almost empty.

Salheya was packed at night. All cafes and restaurants were full and we had to wait for almost an hour to get a table at Gathering. Walking with high heals was not easy because of all the bricks and it was funny how all women were watching their steps. I loved everything about Gathering; the style, the food, the colors and the location.

The Avenues didn’t exist when I last went to Kuwait in 2007. I was mesmerized with the Grand Avenues the moment I stepped in. It was bright, spacious and grand! I couldn’t stop smiling while walking around and seeing people having coffee, shopping, eating, socializing and even working out! It was the place to be. I fell in love with the new section too (traditional souq) and enjoyed shopping there. All the cafes and restaurants were busy and tempting to try. I wish that I had more time to try them all but we only managed to try Figs and Katsuya for lunch, Life with Cacao and Zwara for dessert and Khobz ElDar for a snack.

I found the concepts and menus of the local contemporary restaurants very similar. They mainly served modern salads, pizzas, pastas and small dishes to share. But each one of them had something special that was highlighted by people. 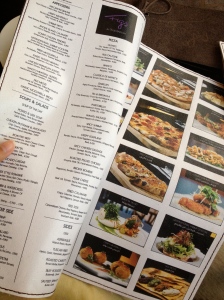 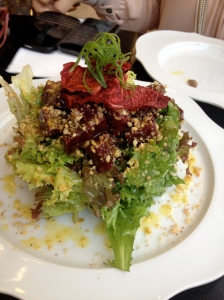 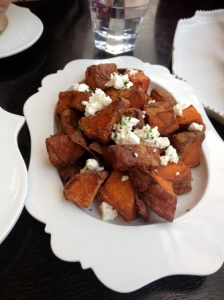 If I had to pick one restaurant to recommend after this trip, I’d definitely say Katsuya. I can easily say and without any competition that it’s the best Japanese food I’ve ever had. Every single dish was extremely tasteful and delicious. Staff were very helpful and friendly. Rating: 10/10. 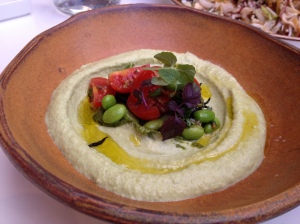 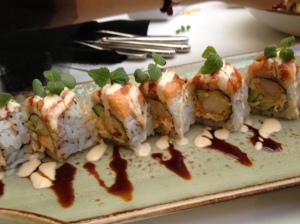 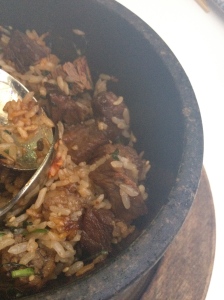 I liked the concept of Khobz ElDar, Saj on the go. The interior of the place was beautifully designed and the small place was well utilized. The taste was average though. 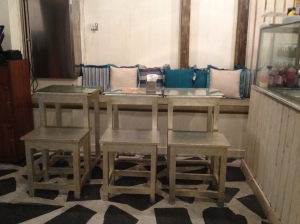 Life with Cacao, what can I say! Delicious desserts that keep surprising you with every bite. Dip the cookies in the chocolate fondue and you’ll be in heaven. Their coffee was also good. 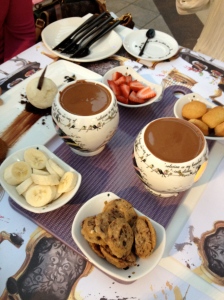 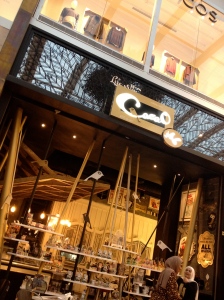 Cocoa Room was lovely but I felt it was a bit overrated. Service was bad, tea was finished and falafel was finished too. We ordered two egg dishes and they were ok. BUT the Nutella French Toast was one of the best desserts I’ve ever had. It looked beautiful and tasted even better.  Not to be missed if you’re visiting Kuwait. 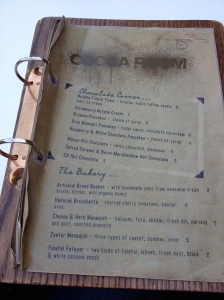 Melenzane was located in a complex inline with other restaurants and cafes and it was nice to walk outdoors and view the different available options. It was Thursday night and the place was packed. Food was good but also too heavy that we couldn’t finish any of the dishes. If I had to choose between Figs and Melenzane I’d go for Figs. 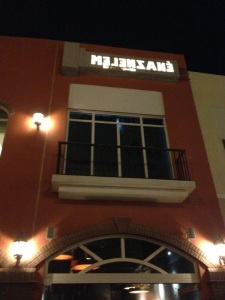 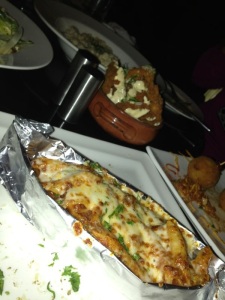 We had another amazing dessert in Prime & Toast, Cream Ford Caramel. What I loved about it is how it tasted like a modernized version of a Ramadan homemade sweet. You can feel the famous taste of Morning Coffee biscuit mixed with condensed milk but it was much more than that. It had a rich taste and it was addictive. You won’t be able to put the spoon down.

Putting food aside, I loved the local radio stations. Their DJs were funny and their choice of songs was upbeat and fun. We were thrilled when we opened the radio once and Ya Nar Shibby started playing. While walking to Melenzane, one of the passing cars was playing Ya Seedhum Wainek for Nawal.

Their publications are another story. The local newspapers and magazines are interesting and written/published by passionate people who have the experience and knowledge. Kuwait was always the leading country in the Gulf when it came to media and it’s impressive how it still is number one. 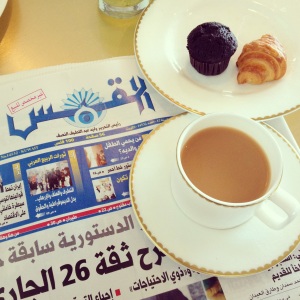 Kuwait is a country of class and high taste. Inspiration can be found in every corner; between the old and the new, the traditional and the modern, the affordable and the expensive. People change after going through catastrophic events and I can see how the Gulf War changed Kuwait and every Kuwaiti. They grew out of it, built their country with love and confidence and they keep developing by the day. And I really respect that.

Check out my other blog : Dining Scene Critic